I got up at 2:30 and took my shower and Nan was up at 3. We had arranged for a cab and he was there by 4:10. The driver was from Poland and was one of the most intelligent dudes we'd met. If he'd been around 20 years older he would have been mine, I tell ya.

Our flight wasn’t until 6 AM, but we were told we had to get to the airport 1 1/2 to 2 hours in advance for the flight because of stringent checks they do when going through security. Boy, were they right. Because of my knee replacements I often have to get patted and wanded. Sounds vaguely dirty. Anyway, I’m used to that. But what took us longer, was they made Nancie throw away everything that didn’t fit into the quart bag (or maybe it was a litre bag). She had a hard time deciding. Finally I was able to take one thing for her and put it in mine. 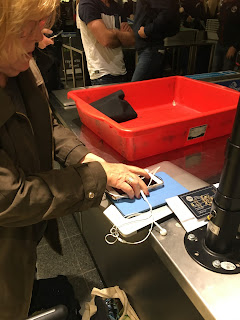 So we took RyanAir from Dublin to Glasgow. The flight was perfect. It’s a budget airline so no free soda, etc. However, at that hour we didn’t need anything, so were quite content. The one odd thing was what was on the tray table. So I looked at this the entire way. 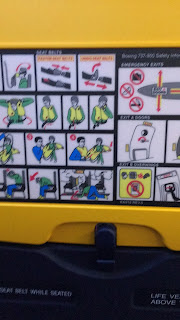 We took a cab to Queen Street Station where we had three hours before our train was to leave. So we sat in a coffee shop across the street for a few hours.

The train to Ft. William was so much fun. We had hilarious neighboring passengers.

No Wi-Fi on train AND no electric plugs. We were sad. Yet it made us have to look at scenery and to converse, with each other and with other passengers.

Drank Bitter and Twisted ale with a neighboring woman. She said the title accurately described her. She (72 years old) and her friend (78) were on their way to the smallest island in the Irish Sea where they’d been going for many years. They used to backpack and camp but a few years ago gave themselves permission to start staying in a cabin. They were delightful. 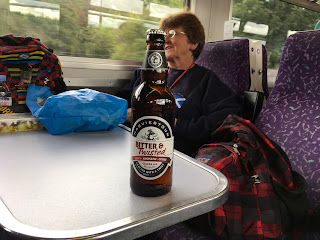 We past the River Clyde estuary, where the Clyde meets the sea. Gorgeous. And Loch Long lived up to it’s name.

At our table, Graeme and Clare were going with friends to a wedding at Ft. William.

Their friends Karen and David were across the aisle, sitting with the older women.

The four friends played a card game called Scabby Queen to see who got the ensuite room at their Guesthouse. Karen and David won. It was a fun kids’ game and I look forward to teaching it to my great-nieces and -nephews.

We saw Loch Lomond, of fabled song and story. I well remembered it from my trip 13 years ago. When I get caught up I’m going to compare that trip’s blogs with this one’s.

So the party people kept offering me drinks and I kept taking them. Some were just small tastes, so it wasn’t as bad as it looks. I had:
Bitter and Twisted Ale
Vodka and juice (Irn Bru)
McClaren whisky (which I bought for myself)
Prosecco
Tenant Lager

All in all, these people made an enjoyable trip even more fun.

We arrived at the Ft. William train station and grabbed a cab. Andrew and his son Andy own and operate A and A Taxis, so we’ll use them if we need other rides. He was an interesting dude.

Acorn Lodge, our new home, sits like a tree house above the village. We’ve walked it a few times now, and it is really hard work. No wonder I’m hungry all the time. We do have a gorgeous view from our tree house.

I dearly love little oddities like how things work, plugs in the wall have to be turned on, refrigerator is behind a closet door, lights work differently. All these things are part of why I love traveling to different countries with different cultures.

We’ve noticed that both Ireland and the UK, not typically known for their fabulous food, both have fantastic fares. Every day I’ve been able to have a vegan soup for my starter. And there are so many vegan and vegetarian meals around. Every single restaurant has them. I feel so lucky.
Posted by Jerilyn Dufresne, author at 12:36 PM