So I need to change the title of this blog because my life IS an adventure. I'm sitting in the lobby of the Sheldon Park Hotel in Dublin, Ireland as happy as one person can be. I mean as happy as an old, overweight, arthritic, single, no-money person can be.

I am indeed happy. I tried to blog for the past few days, but I can't do it with the Blogger app on my iPad. So here I am with my laptop, typing away. I knew there was a reason to lug this Mac Air along with me.

My plane ride itself was pretty non-eventful, except for the 8 hour layover in Chicago. However, even that was fun because I met the O'Malley family, and had a beer with them. Had an Irish beer I like called Smithwick's. (Pronounced Smitticks, so make sure you say it right so you don't get laughed at. However, even when you're laughed at it's fun, because the Irish have such a great laugh. I learned how to say it when I was here several times in 2004 on business, but sure got laughed at until I got the knack.

By the way, a handsome young man just stopped to talk with me and I wanted to take him home. No, not for that. Although the idea does bring fancies to my mind. :) Nope, because I would love to hear him talk all the time. What a delightful young man.

Anyway, back to the narrative. I watched movies the whole time on the 6 hour plane ride, and enjoyed it. Didn't sleep a wink. So if you follow me on FB, you know I didn't sleep the night before either. I was a zombie...

But then I saw my friend Nancie at the airport and immediately felt better. Nan is such a tonic for me and so much fun. We are quite different in many ways, but are similar in just as many. Because we're both flexible and pretty upbeat, we are great traveling companions.

We took the AirLink bus from the Airport to Centre City of Dublin, basically downtown, and then needed to take the tram from there to our hotel. We were running on empty by that time and when we passed a cab on the way to the tram stop, we thought "what the heck" and got in the cab. Colm was our driver and it was easily the best cab ride ever. By the way, Colm is the Irish spelling and Collum is the English, and don't you dare mix them up.

Colm was so funny and had us laughing for the entire trip. He taught us a few Irish expressions and some of them included the F word, which is so common here and not frowned up as much as in the States.

Our hotel is old and out of the way, and is just perfect. However there are some cultural differences, that's for sure. For example, the Irish Breakfast is huge and if we add it to our room it's only 12.99 Euros but if we don't, it's 14.99. Here's a pic: 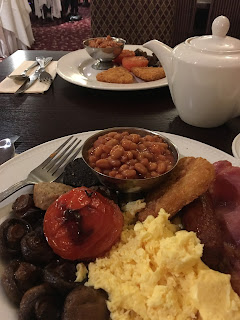 Nan's Full Irish Breakfast in the foreground and my Veg Full Irish across the table. YUM! 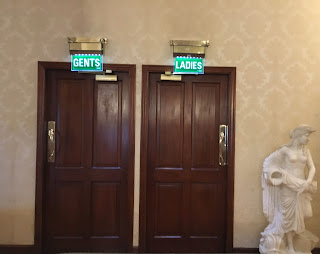 Here's my view in the lobby right now, Ladies and Gents.

We didn't do anything yesterday except a short nap and a short walk. We walked from the hotel to the tram stop down the street, so we'd know where it was. Today we're going to Trinity College to see the Book of Kells and I am thrilled. We'll take the tram downtown and then shop, walk, and lunch prior to going to the viewing. Our appointment is at 3 PM, which is 9 AM Central Time in the US.

We just ate in the hotel for our dinner. Had some really good food, and I had a Smithwick's and Nan had Chardonnay. 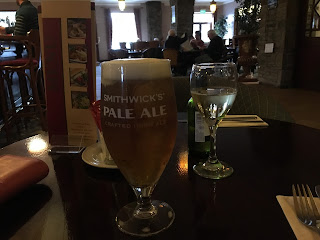 The huge news is that we went to bed around 9 or 10 PM and slept all night. When we awoke at 7 this morning, it was because Nan had forgotten to turn off her alarm. I was across the room with earplugs in and I heard it. She slept right through it. Really funny. But now we both feel back to normal already, so that's a definite plus. Yesterday we were zombies and today we're back to being adorable old ladies.

And the tub/shower has to be experience to really understand how funny it is. One thing I absolutely love about other countries is how the facilities work in the bathrooms. The toilet flushes in a really "odd" way to us Americans. I love it though. Secondly the tub is up high and so hard to get in and out of. Nan is even shorter than I am, and when she went in to take a bath I yelled, "Good luck, Shorty," and she was in stitches over it. I know it will appear in her reporting as well. :) The shower knobs are separate from the tub ones and when I showered it took a long time for me to figure it out. I explained it all to Nancie, but apparently she couldn't make it work and ended up bathing instead. Don't know why, but I feel like a mechanical genius. :) By the way, I'll probably be reporting on toilets and tubs for every new place we stay. I find it fascinating.

(My two favorite bathroom stories are from Sweden and Japan. In Malmo, Sweden at a public toilet located outside, you stand with your feet on either side of a huge rush of running water going downhill. It was so cool. And unbelievably clean. In Japan, there are many "squat toilets." Experienced those in Haiti too. Anyway, I'd had only one beer, but trying to use a squat toilet afterwards was a real comedy of errors. Can't describe it in detail, but believe me it was really funny.)

Another difference, which is pretty cool, is that the electricity doesn't work unless you put your room key into a slot in the room. It's a great reason, because it saves electricity. It's just hard for us Yanks to get used to. I was in the bathroom this morning and Nancie was going to go downstairs to the Breakfast Room to get our table. When you take the key out, the electricity stays on for one minute, so she didn't even think that I'd be in the bathroom in total darkness. Well, I was, and it was a different experience. Another one for the blog, or the book, or both. Ultimately I got out, found my key, and put it in the slot, and all was well. I finished my ablutions and we had another glorious Full Irish Breakfast.

Now it's quiet time. Nan is writing in the room. I'm writing in the lobby. It's 10:42 AM as I write this, and at noon we'll take the tram downtown for a late lunch and lots of exploring. Can't wait to report on the Book of Kells, check it out with Google. That's your homework assignment.

The handsome young man just came back. God, I love traveling.
Posted by Jerilyn Dufresne, author at 4:43 AM

Wonderfully entertaining to travel along with you from the comfort of my armchair.